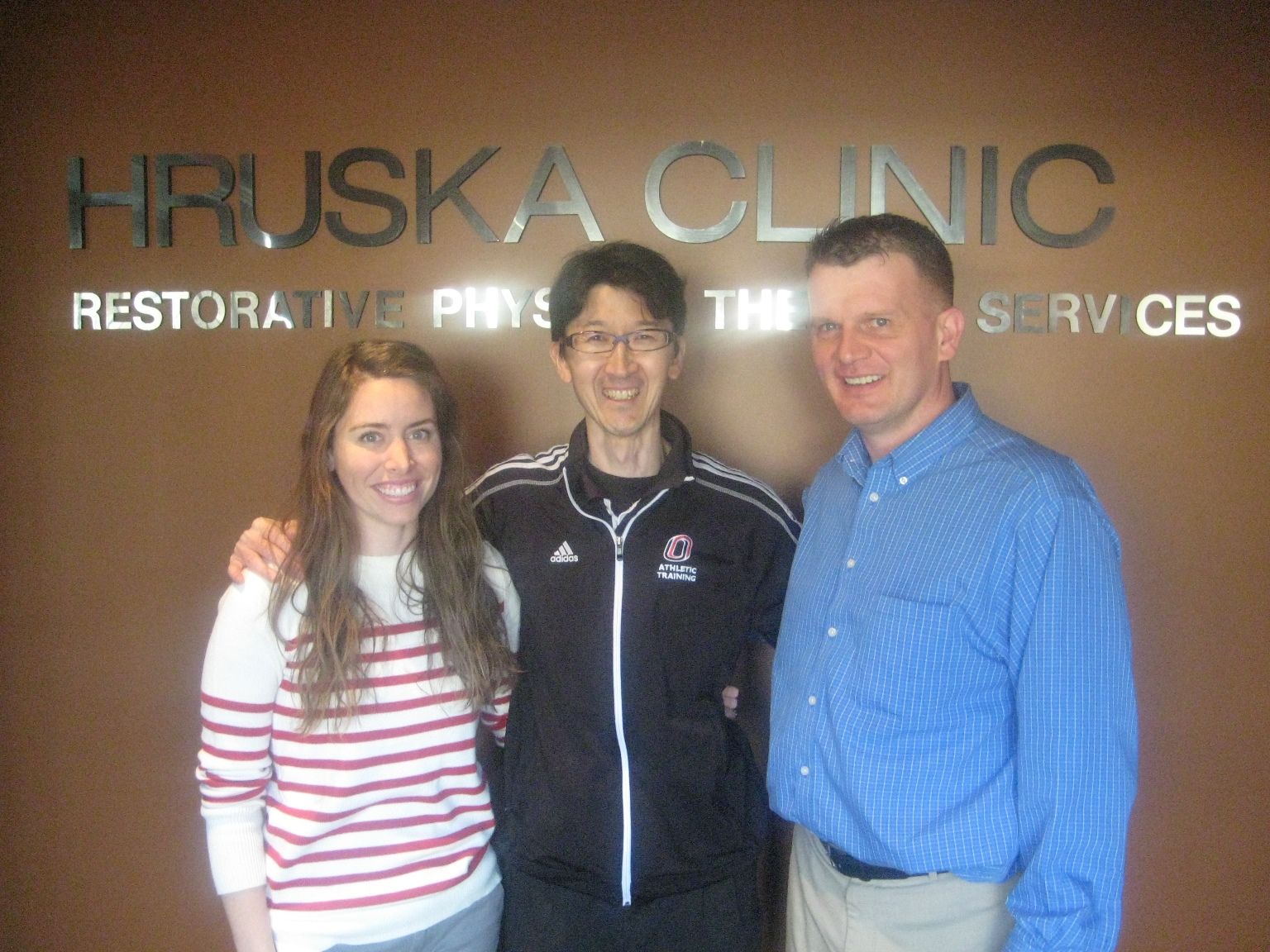 20 players were calmly lying down all the way on the hallway, the both feet on the wall, and they were reaching one arm toward the ceiling and breathing deeply. I saw them at the Omaha Lancers Ice Hockey during the last clinical of mine for the Graduate Athletic Training (AT) Program of University of Nebraska Omaha. That looked totally strange to me…”What were they doing right there?”. This moment was the very first time to see the PRI for me. I became deeply fascinated by them and needed more detail about the PRI since then. I started learning the PRI, taking the primary courses and shadowing under PRC Ryan Hruska at the Restore PT in Omaha after my graduation, August 2015. Additionally, I could begin shadowing under PRC Jason Masek at the Hruska Clinic in Lincoln since January 2016.

There were many terminologies and exercises that I never saw and heard before. I worked as Physical Therapist in Japan for 10 years, after that I finished the AT program in the U.S. My knowledge that I learned from them was totally reversed by the PRI concept. It shocked me speechless and was like a whole new world!

As I took the primary courses and observed patients at the clinic, I could understand the concepts little by little about anatomical asymmetry of the body, right side dominant world, lack of awareness of the vision and occlusion, and improper breathing movement. I realized that how so many we can see people and patients who do not have reciprocal motion of the body! Then, how much the breathing has a high impact on the posture and the whole body!

The impact of the breathing to the body was an eye-opener to me because I never directed my attention to the respiratory function for my patients and athletes in past times. I also found that the posture would be greatly affected by the vision and occlusion; therefore, to keep eye open for them would considerably contribute to avoid the development of mal-posture for people, especially kids in childhood.

Second week of March at the Hruska clinic, a patient who suffered from constant headache for a year came to see Jason. The patient reported that felt the headache in the forehead constantly on daily basis. He had done sinus surgery a year ago, and the surgery made breathing easier through the nose. He got spiral fracture in the distal fibula in the right many years ago as well.

Jason checked his gait and looked for the relationship between the headache and the vision, occlusion, and breathing. In the result, the symptom was alleviated by changing breathing movement, which was to lower the rib cages. Jason assumed that the patient did not have breathing in a correct manner after the surgery although nasal obstruction was removed. In fact, the thorax did not move down enough in exhalation, and the patient reported that if the thorax was forced downward, the headache improved right away.

The patient showed the PEC pattern that included bilateral anterior pelvic tilt, increased lumbar lordosis, and flat middle back. The upper thorax did not expand in inhalation because the both pectoralis major were really tight. The thorax was pulled up for getting air by accessory respiratory muscles and upper trap muscles instead of the expansion of upper thorax. In the result, the muscle tension would increase in the base of scull and get worsen the symptom.

As the first treatment options for the patient, Jason instructed 90-90 Hip Lift with Balloon, Supine Pectoralis Stretch, and office ergonomics. These exercises focus on decreasing the thorax position in exhalation and expanding upper thorax in inhalation. Seated posture on an office chair should be slouched back which means flexed spine, rib cage down, Left AF IR, and knees above hips. The patient also was encouraged Balloon exercises in sitting position to restore the thorax position at his office.

As many patients demonstrate improper breathing, they cannot do full exhalation because of their awareness on their inhalation; thus, the thorax moves up, and accessory respiratory muscles work a lot with inhalation. Consequently, elevated rib cage like PEC pattern develops further. Keep in mind, “Breathing begins with EXHALATION”.

I will be back to Japan and work as a Physical Therapist and Athletic Trainer for patients and athletes. Of course, I am going to use the PRI for them! I firmly believe that the PRI would help them out. Although I still struggle to understand the PRI, I really enjoy learning it because I can gain further the anatomy and biomechanics through the PRI. Then, I am planning to take the test for the Postural Restoration Trained in 2017 or 2018.

Finally, I would like to say “Big Thank You” to Ron Hruska, Jason Masek, and Hruska Clinic Staff and Ryan Hruska and Restore PT Staff. They provided me a precious opportunity and helped me to understand the PRI. I thank you all from the bottom of my heart!